This article originally appeared in MmoGah and has been published here with permission.


For an early game character, an entirely crafted set is probably the most practical thing you can wear, being totally suitable and affordable. In this guide, The Real Godzilla shows you the five best craftable sets for PvP content in The Elder Scrolls Online.

You can craft Heartland Conqueror at Sariellen's Sword in Blackwood. You need to have the Blackwood and seven Trait Research to craft this set. 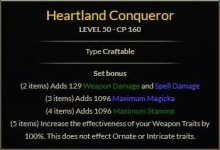 Any Magicka class can use this set. The five-piece increases the effectiveness of your Weapon Traits by 100%. For that reason, you'll want to double-bar this set.

What makes this set so powerful over Spinner's Garments is the extra Healing you get on your back bar. Heartland Conqueror has its own unique buff, so you get the extra 9% healing from running the Powered Trait. Additionally, you also proc Minor Mending on a Templar and then proc Major Mending from a heavy attack on the Resto staff. Ultimately, you are going to get some high stacks on your overall Healing and tankiness.

Besides Sharpened on your front bar and Powered on your back bar, there are a few other Traits you can use with Heartland Conqueror:

To run the Charged Trait correctly, you need to know what you are doing. Most people run Charged on a Magicka Warden, and the reason is that they can proc the Chilled status effect doing Frost Damage, and enemies who have recently been Chilled take 10% more Critical Damage because it's a passive on the Warden.

You can craft Diamond Victory at the Pentric Run in Blackwood, and you need to have the Blackwood DLC and five Traits Researched. 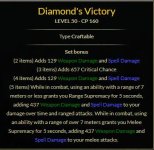 Magicka Necromancer (aka. Magcro) is a class on which Diamond's Victory will 100% work. When you pair the set with The Master's Perfected Inferno Staff, you'll get nearly 1,000 Spell Damage for a burst combo every time you hit your skills.

This set is comparable to New Moon Acolyte in certain aspects, and it doesn't have a cost increase. You don't get any extra Healing power, but it's still a balanced and versatile set.

You can use Diamond's Victory on other classes, depending on if they proc for the Melee Supremacy or Ranged Supremacy and how you want to keep the uptime. On Necromancer, this set will be a little different because you can keep it 100% uptime.

You can find Stuhn's Crafting Station at the Hunter's House in Greymoor, and you need to have the Graymore DLC and complete Research on five Traits to craft this set. 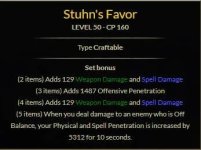 The recommended classes for this set are those that have an inherent off-balance skill, such as Stamina Templar (Stamplar), Magicka Templar (Magplar), Stamina Nightblade (Stamblade), and Magicka Nightblade (Magblade).

This set is easy to proc: you are using a skill that has an inherent off-balance, and whenever you deal damage to an enemy who is off-balance, you'll gain 5,312 Physical and Spell Penetration.

However, when you are fighting, there is an off-balance cooldown on the targets. For that reason, Stuhn's Favor is not the best for Dueling. But for Battlegrounds and Imperial City, this set is unmatched.

Below is a good comparison between Stuhn's Favor and Spriggan's Thorns:

Spriggan's Thorns gives 3,460 Penetration on the five-piece. But when you are fully buffed with Stuhn's Favor, the set provides almost double the amount of Penetration Spriggan's grants.

Most importantly, you can front-bar this set, meaning that Stuhn's Favor gives you not only much more Penetration but options to run something on your back bar.

You can find the Daedric Trickery Crafting Station at Randas Ancestral Tomb in Vvardenfell. To craft this set, you need to have the Vvardenfell DLC and eight Traits. 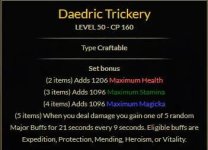 Any class can use this set, but it should be a class that can run this on the back bar. The issue with the set is that the buffs are RNG-based. But this is still a versatile set.

You can find Clever Alchemist's Crafting Station at No Shira Workshop in Hew's Bane. To craft this set, you need to have the Thieves Guild DLC and seven Trait Research.

Clever Alchemist is a versatile and 100% back-bar set. Using this set will significantly increase your Weapon Damage. You can run this in conjunction with the Vateshran 2h, or you can run this with The Master's Inferno Staff to get a ton of Weapon or Spell Damage.

You can use this set on any class, but in my opinion, this set fits Stamina builds more. I highly recommend Stamina Sorcerer (StamSorc) because of the Dark Deal Skill. With this skill, you can get Stamina recovery without a potion. You can also use this set on Stamblade if you want to be bursty.

The downside of this set is that you don't have a potion to use defensively. For that reason, you might have some problems with sustain on other classes. I would recommend running at least one recovery or using The Serpent Mundus Stone or The Atronach Mundus Stone.

Clever Alchemist gives you a lot of damage for burst windows, so you don't need high Spell Damage or Weapon Damage on your Jewelry Traits. But you need to be able to sustain without a potion.

Those are the top 5 craftable sets for PvP in The Elder Scrolls Online. If you found this video helpful, don't forget to smash the Like button and subscribe to The Real Godzilla's channel.

To make craftable sets in ESO, you need to have the desired Trait Researched and Materials. For players who are new to the game or just getting into Crafting, it may take days to craft a set. If you want to get these sets quickly, you can buy them on MmoGah, which allows you to get what you want in no time.

Not only can you buy ESO items, but you can also buy gold for ESO at MmoGah. Most importantly, no customer got banned so far. To know more guides and tips, please visit our ESO news page: there are some efficient ways to farm Companion gear, and you'll also get on ideas on how to build your own character successfully in ESO.
Last edited: Sep 24, 2021
Show hidden low quality content
You must log in or register to reply here.

News: Best Upcoming MMORPGs 2018 and Beyond - Is There ANYTHING Worth Playing? - Credit to uploader

Are you a Wizard with great power...?