Overwatch’s 1.28 patch is finished and was recently applied to the live game. The big highlight is a new map – Busan, in South Korea – but there’s also a new way to search for cosmetics in the Hero Gallery, some nice quality-of-life changes such as the ability to always see allies through walls, and some long-awaited TLC for Reinhardt’s ult, Earthshatter.
Changes elsewhere are pretty minor. Birgitte’s shield bash now knocks down and gets knocked down by other charging targets (such as Reinhardt), and you should find you’re able to more precisely tune the relative aim sensitivity while zoomed as snipers Ana and Widowmaker. Scintillating stuff. Naturally, there’s the customary cavalcade of bug fixes, though one is somewhat more significant than normal: the ‘fix’ to Roadhog’s damage calculation may, in practice, prove to be a nerf of some substance.
These patch notes are now complete and have been pushed live. Expect the version 1.29 patch cycle to start spinning up on the PTR within the next week or two, but in the meantime, read on for all the details on the latest state of Blizzard’s big shooter. 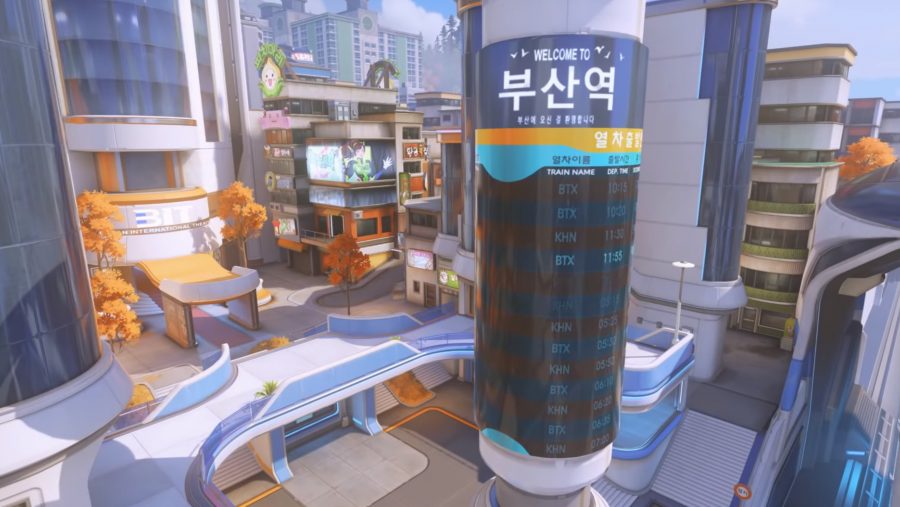 Overwatch’s latest map is set in Busan in South Korea, home of star gamer and selfie-taking mech pilot D.Va, and you can play it right now on the PTR. It’s a Control map divided into three distinct locales: Sanctuary, Downtown, and MEKA Base.
The Sanctuary is surrounded by an ancient temple, beautiful gardens, and historic architecture. Downtown is a bustling metropolitan zone, featuring a busy PC bang, flashy karaoke bar, and light rail station (watch out for the train). MEKA Base is a military district, home of the MEKA squad, South Korea’s frontline defence against the ‘gwishin’ variety of Omnics that plague the city. That means this is where D.Va lives, and you can check out her quarters.


Busan was unveiled at Gamescom alongside a new animated short starring its most famous resident. Personally I think the Reinhardt short is still the peak, but none of these have disappointed.


You can read more about Busan in our coverage of its announcement.
OVERWATCH PATCH 1.28 HERO GALLERY FILTER
On the PTR, the Hero Gallery has a new ‘Filter’ feature, which enables you to view all Overwatch’s cosmetics in a new, more easily navigable way. You can customise your search for cosmetics by category (including seasonal events, or whether they’re from the Overwatch League), rarity, and whether they are unlocked or yet to be collected.
OVERWATCH PATCH 1.28 GENERAL UPDATES
Developer Comments: “While this is a bug fix, we wanted to highlight this change as it can affect gameplay by changing the damage output of the affected heroes in certain situations. After this fix, weapons with spread should now correctly calculate critical damage for each individual pellet that lands in a critical region (e.g. a headshot). The end result is that it should be significantly easier to deal critical damage with any weapon that fires multiple shots simultaneously, such as Reaper’s Hellfire Shotguns and D.Va’s Fusion Cannons. In addition, we’ve changed the logic for when these weapons display a critical marker on your screen. It now requires 30% of your shots to be critical, rather than displaying it if a single pellet hits critically.”
OVERWATCH PATCH 1.28 HERO UPDATES
ANA

Shield Bash
Developer Comments: “Currently, when two charging targets hit each other, they both fall down and are briefly stunned. You can see this interaction with Doomfist’s Rocket Punch and Reinhardt’s Charge abilities. Brigitte’s Shield Bash previously wasn’t included in this group, which meant that if she used Shield Bash against these other abilities, she would generally stun them and not be affected herself. This change makes it so if she uses Shield Bash against Charge or Rocket Punch, both players will be knocked down.”
REINHARDT

Earthshatter
Developer Comments: “We’ve given Earthshatter a complete overhaul to combat inconsistencies with its performance. These changes will make Earthshatter’s behavior more predictable and effective.”
WIDOWMAKER