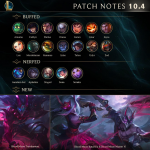 Hello to everyone except those who aren't my friend.

Before we dive into the patch changes, a quick PSA-- patch 10.4 will not be going live until February 20 due to the holidays!

In this patch, we're breaking top Sona and Soraka since they're grossly overpowered in the lane. Additionally, we're making larger changes to the jungle champion pool and giving some traditionally non-jungler champions better tools to do so if they want. This way, we're diversifying the arguably small champion pool for veteran and new players. And finally, we're making Aphelios a little easier to understand not just for the person playing him, but for his opponents too.


Greetings to all Craggle players and everyone else who has yet to find the light,

Headliner: We reworked the Glacial trait to have a bit more punch. Your Glacial champions will now generally stun less often, but they'll also deal additional magic damage with each stun. We also nudged Crystal and Poison down a peg or so, while buffing the "death can't stop our love" duo of Senna and Lucian.

Let's get into it!

Thread starter
[email protected] all in one patch notes