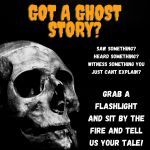 Although I am the horror queen of Fever (and phasmo "fearless leader"), i will say im a bit of a skeptic when it comes to the real-life ghosties (dont cancel me lol). BUT with that said I had an experience i just CANNOT explain.

So for a bit of a back story, when I was in maybe 4th grade, there was a huge murder of 3 kids that were in my high school at the time. My town had 2 elementary schools and 1 jr/sr high school (no jr high), and I graduated with 55 in my class, to give you a sense of HOW SMALL of a town I'm from. A mom went on a mental breakdown and murdered her 3 kids, the dog (i think), and then herself (im prettty sure). One of the kids was a theater girl (like myself) and was killed the weekend of their performance of Hollywood Hillbilies. So Sunday afternoon after their last performance, it was tradition to have a cast party at one of the cast member's house ( we will get to him later). This girl's mom picked her up at the cast party and told my friend's mom that there was a family emergency and she had to pick up her daughter a leave immediately. She then drove her, killed her, and left her in the car as she went back to her house, after already killing the other 2.

Fast forward to 2010, when I was in 10th grade and we were doing How To Succeed in Business Without Really Trying. I was in this show with a LOT of people who knew/were friends with the kids that got murdered that weekend (including the guy who hosts the cast parties every year). One day, before our show, i was in the auditorium with "cast party friend," and he told me the whole story of these murders and how the girl was at his house before it happened yadda yadda. I was obviously shocked, but I also knew about it previously. It was insane hearing it from the perspective of these poor kids' friends.

That show night after hearing the whole story, in the MIDDLE of our show, i was in a wing that had a vaulted ceiling and you could see the balcony of our storage area above the backstage. On the other wing was the pulldown ladder to get up there. So it was like an attic that had a balcony that looked over one of the wings. We called it the batcave. So anyway, in the middle of the show i keep hearing footsteps all over the bat cave and I was pissed because i thought some 7th/8th graders were goofing around up there during the show (NOT COOL BRO). So i looked up to the balcony and I saw a girl with long brown hair leaning over it and looking down at me. The balcony had a metal bannister across it that was about waist high (on me i'm 5'4). So she was leaning over the railing and I could see her torso and up, and her long brown hair was hanging all around her face as she looked down at me. So i looked at one of our crew members and was like "WHO IS UP THERE??!!" and he was like, "up where?" I was like "the bat cave! ive been hearing footsteps all show and i just saw someone up there. So, he went over to the pull down ladder wing, came back, and said "the ladder was closed no one's been up there since this morning." i believed him because we would KNOW if someone got up there during the show. The ladder isn't that quiet and people are ALWAYS in the wings, so they would have been seen. After that i didnt hear anything, and no one was ever up there. But dammit I SAW THIS GIRL WITH BROWN HAIR.

Later i found out that, the weekend of our How To Succeed in Business Without Really Trying show was the same weekend TO THE DAY as Hollywood Hillbilies the weekend this girl was murdered, and you guessed it, she had brown hair.

Ill never forget that day and I'll never forget the brutal murders that shook my small Pennsylvania cow town to the bone. It's so crazy to think these kids were only a few years a head of me, and we had so many mutual friends.


Who has a ghost story!?
Reactions: 1 user
Show hidden low quality content
You must log in or register to reply here.