The Fortnite Battle Royale freight train keeps rolling along non-stop, seemingly plowing through anything and any other games that might get in its way. Being the most popular of the currently trending genre certainly comes with its perks too. In fact, in March alone Epic Games managed to grab 223 million perks in the form of dollar bills from Fortnite alone. Since the game itself is in a free-to-play beta format (at least for the Battle Royale aspects of the title) that means most of this income came in the form of battle passes and Fortnite's in-game currency, V-bucks. 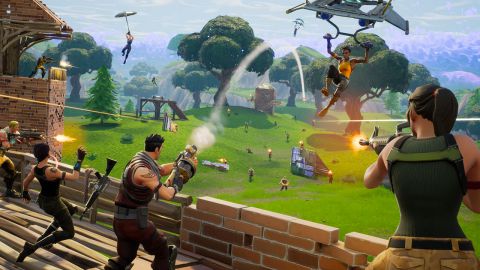 According to Games Industry.biz, these numbers come from independent research firm Superdata. The research company claims that Fortnite made its millions across all platforms (PS4, Xbox One, and PC). That makes Fortnite the top-grossing digital console game of the month and fifth highest-grossing digital PC game. On top of that, their estimated total is 73% higher than it was just in February alone.
Superdata goes on to reference Far Cry 5 as the second top-grossing title of March at an estimated 2.5 million digital units sold, beating its predecessor from two years ago, Far Cry Primal by six times its console units sold. Digital video games, in general, saw their sales rise by roughly 2% to a grand total of $8.9 million mostly thanks to the rise of the digital console market.

Could it have been the Ninja/Drake bump that drove up Fortnite's numbers? It's hard to say. No matter what the catalyst may be the impressive meteoric rise of Fornite has been fun to watch as the title evolves. Fans interested in checking out the Fortnite Battle Royale open beta can do so for free right now on PS4, Xbox One, iOS, and PC.