Another long year in Fever is coming to an end and a new one is just on the horizon - so let’s take this time to remember and think back of the past year;

We have seen lot of people come and go, like heybob, JSTFY, Worggy and Jam - just to name a few examples of people that we had to say goodbye to. Of course they’re not gone forever, but they left a notable gap in the clan that’s not so easy to fill.. some of them have been very active and part of the everyday life in our clan to some of us. They helped shape Fever and left their marks in our clan.

But, this year we’ve also had a lot of fun together and a lot has happened regarding our game sections; We have witnessed games rise and fall, such as Black Desert Online - which went down faster than the Titanic - and Overwatch, and also the return of old jewels like World of Warcraft and Battlefield. There have been some great events such as the Dota 2 League, the still on-going Cards Against Humanity Game Nights, and the always enjoyable Overwatch tournaments.

And we’re thankful to our amazing Fever streamers, such as Bot_Doc, Blackstone, Seal and others, who put countless hours and effort into their streams to bring us entertainment. It was a joy to watch you play, and hopefully you will keep on in the next year.

I would also like to give a shoutout to the leaders of the community for showing great dedication and willingness to support us officers through thick and thin, and to all the officers as well - they are using their own personal time to make our time here in the community more enjoyable. And last but not least I want to give a shoutout to every single member of this clan - without you, Fever would not be what Fever is today; an open and welcoming community that I can proudly call my family.

And I thank thee for thy chest hair,
for thou engender true sexiness.
And I will follow thee proudly,
be it for thine eyes,
or body or sweet lips,
or even thy milk,
for it is not good to withhold fluids.
And I need to take care of my body,
as beneficiary of thine holy goodness.

Welcome aboard, everyone!
We're glad you decided to join us so late in this year, and hope you will have a fantastic 2017 together with us.

Here we want to dwell in glorious reminiscence of this year’s Fever-Memes. Some will die, some may live on - they will always have a place in our hearts and we want to spread the cringe and raise awareness.


Of course, Cybernetcrash got the best jokes. To name a few:

“It's huge!' she drooled as she stroked his massive erection.
'I know!' he said, 'I didn't think I had enough Lego to make the Eiffel Tower'

“iDell’s Musk is quite known here in Fever and I sexually identify as iDell. Ever since I was a boy, I dreamed of being smelled by people around the internet. People say to me that a person being an iDell is impossible and that I'm fucking stupid, but I don't care - I'm beautiful.
I'm having Kimenu sell my scent to random people for 2.49$ on eBay. From now on I want you guys to call me "Sir Smells-a-lot" and respect my right to smell from above and smell needlessly.
If you can't accept me, you're an iDellaphobe and need to check your smelling privilege. Thank you for being so understanding.”​
~ An unknown, very smelly person​ 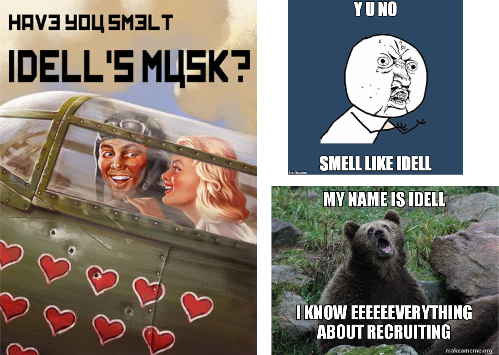 “Guys get the fire extinguisher!... ohh wait, Doiri has already burnt out.”

~ A person witnessing Doiri burning out 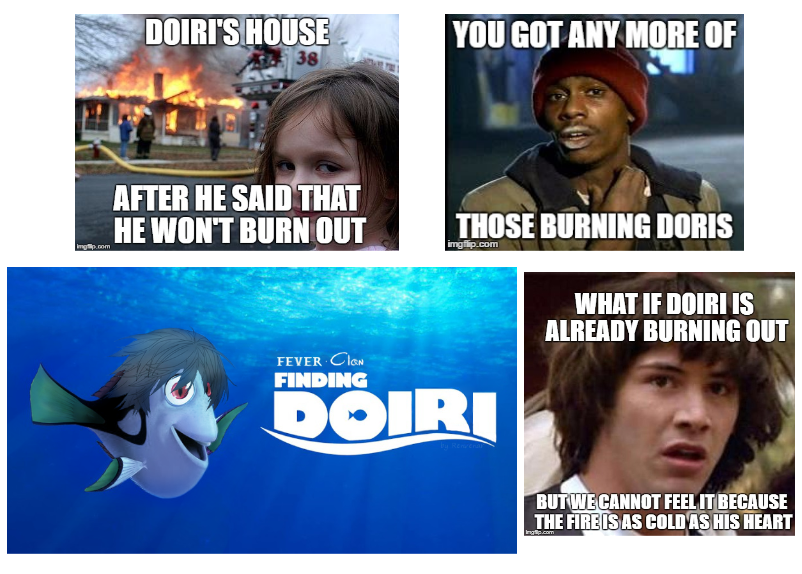 Due to severe burnouts, we decided to intervene and had a surgical procedure performed to transform him into a fish. He lives on happily now and even became the star of his very own movie: Finding Doiri!

Fever congratulates him and wishes him the best on his future endeavors within our community - and hopefully he won’t end up on a sushi plate.

While we are speaking of sushi though - do you remember what Perwild, the sushi-lord, has done today to piss you off? Well, we don’t. But to refresh our memories, let us recall some of the most iconic things from this dedicated, fifteen pages long thread in the member’s discussion:

“Being perwild.“ & “He hasn’t said hi today.” ~ Seal
“He breathed in my general direction. Totally asking for the bomb shelter, again.” ~ Still
“He asked me to play Overwatch for a tournament." ~ FC Ghost
“Dropping the ball on Diablo and Bob_o.” ~ Emrilia
“Doesn't even know I was the D3 CC “ ~ Bob_o
“He said hi to me.” ~ A confused Seal
“He failed as my Experimental weapon when used the first time. . .” ~ TheBossGuy
“Perwild tried to altar boy a demon” ~ Gaudkiller
“Nothing, because he's awesome that way ” ~ Sparkis

And many more!... to be read in the thread. Feel free to necro said thread, of course - the legend must go on.

In the midst of all of this, do not forget the Arimil Self Esteem Project though!
It was founded by Lustrum, who strove to fill up Arimil’s self esteem bar and quickly found great help and support in our community, who were immediately willing to stand by his side in this crusade in the name of love and justice.

The battle is over since a few months…
but we shall remember everyone’s efforts and their strong will to fight for a greater good!

Ah… so many memories. There’s some things though, that last until today; for example KittyMae lovingly cracking the whip at Badger (we would do that too, just to revenge Black Desert Online), so he will do his work for the Fever Weekly - as documented here.

Next year she’s also supposed to run for Fever President again - don’t forget to vote then!

While one does not simply discuss politics in Fever, we believe some of the campaigns will include reminders of Fever not being a dating site, the reveal of the very controversial movie titled “Badger alone in the Black Desert”, and Sithis’ extensive research of mysterious wild and home grown plants (soon he will level up to an archdruid). 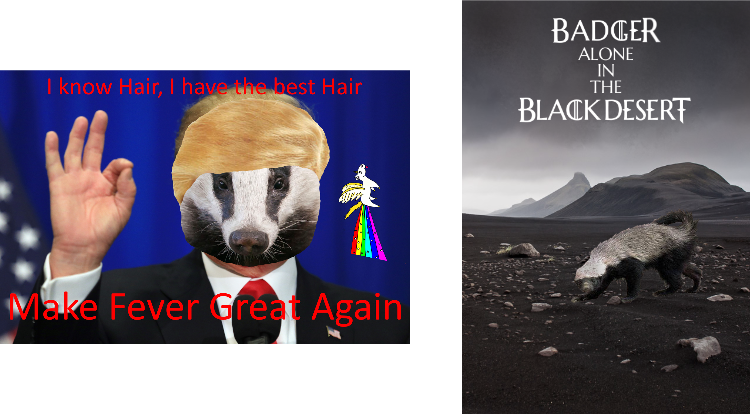 Some other things to remember 2016 for would be the birth of the Neasel back then in May, the final goodbye of our clan-fairy or a certain director’s inability to grammar correctly in every week’s Fever Weekly issue.
Also, a shoutout to Bogo for finishing yet another year without wiping the forum - we're proud!

And… of course, remember Harambe. Rest in pieces (and bullets).

All of these meme-mories - may they be good or bad - shall last for future generations to come. But do not dwell in memories only - 2017 is about to begin and we all will have enough chances to create memes worth to remember at the end of the next year again. 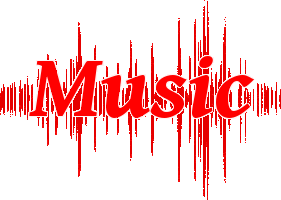 While the memes took over a great part of this issue, our wishes for you all to have a great new year are heartfelt and sincere.

This year has not only been fun - we’ve shortly mentioned that in beginning. People have left us, either by free will or because it had to be. It is a weird feeling to see someone gone, who has been very present to us in this community. They’re not necessarily gone out of the world, but it is still a loss.
That does apply to reallife as well, sadly.

People come and people go - and as harsh as that sounds, it is the truth. This thought does not make it hurt less at first.. We might always remember these people and the good and bad times we have had with them - but there will be new people stepping into our lifes, who will share theirs with us again. We do have to realize that at some point.

The turn of a year to another is a perfect symbol for that - a lot of things kind of stay the same, but there’s new things to come nontheless and without a doubt. Don’t focus on what is lost or what you do not have anymore; try to look forward and go on - often you’re also not alone; if you might realize it or not.
For that reason we're also a community - a lot of us have found friends and a little family here, and have someone care for us; even if we don't notice it for a while.


And with all this being said, we wish you an amazing new year!
We’re so very proud of seeing Fever live for another year and are happy that many people joined us. Hopefully a lot of you will stay for a long time and join us in improving Fever, to make it a great home for everyone.

That Harambe video makes me sad.

Happy new year to all members!

[MENTION=53250]Kimenu[/MENTION] how dare you expose me Dx

Wherever I may roam

iDell said:
[MENTION=53250]Kimenu[/MENTION] how dare you expose me Dx
Click to expand...

Thank you all for all your hard work! Hope that you enjoyed the holidays!!!
Show hidden low quality content
You must log in or register to reply here.
Similar threads